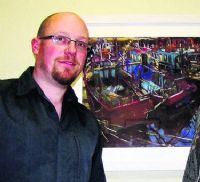 'My current work is divided between the traditional genres of still life and landscape in oil and more recently in soft pastel. The still life's are concerned with everyday items - some items appeal to me as they verge on the kitsch, some for their jewel-like character while others have a personal meaning or simply feel 'just right'.

I envisage my nocturnal works as giving a poetic voice to everyday, mundane places and spaces - seen through the half-light of dawn and dusk or the neon glow of street lamps. I am concerned with the sublime in the everyday and ordinary, the point at which beauty meets perceived ideas regarding ugliness or banality, for example the meeting of the dusty blues and pinks of dusk with a mobile home, or the intensity of car lights in a line of traffic. These atmospheric works are unapologetically romantic and I consider them successful when they connect with the viewer on an emotional rather than an intellectual level.

'The broadening of my practice to include working with pastel has renewed my passion for the 'sun-soaked' landscape and in visual terms has been a particularly exciting time as I strive to find harmony and balance when working with the saturated colours of pure pigment.'

Dave West was born and raised in South Wales and is now settled in Balbriggan, North County Dublin. He studied at the Carmarthenshire College of Art & Design and recently completed a degree in Art History with the Open University. He has mounted 13 solo exhibitions including 'Nocturama' at Draiocht Arts Centre, 'Spectral' at the Leinster Gallery and 2 with the Blue Leaf Gallery. He has exhibited widely in Group Shows including the Royal Hibernian Academy, Royal Ulster Academy and Eígse, and in the UK with the Royal West of England Academy, Royal Society of Oil Painters, Royal Society of Marine Artists, The New English Art Club, The Royal Society of British Artists, and the UK Pastel Society, at which he won the 2013 Schminke Award.

In Ireland he is a regular exhibitor at both the Royal Hibernian Academy and the Royal Ulster Academy.
In 2017, he won the Gold Award at 'Art in the Open' Plein Air Festival in Wexford, Ireland.